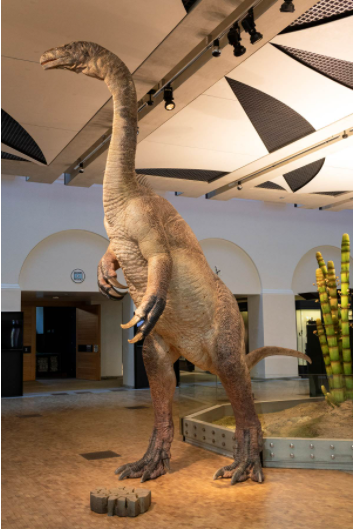 The University of Zurich’s Zoological and Paleontological Museum will soon be home to a new attraction that literally cannot be missed: A nearly eight-meter-long plateosaurus will greet visitors to the museum starting on 15 September. The fossil, which dates back over 200 million years, was excavated in the town of Frick in 2018. The skeleton will be accompanied by a detailed reconstruction of the creature in its original size.

On 15 September, the Zoological and Paleontological Museum of the University of Zurich will reopen its doors following a shutdown due to the coronavirus pandemic and extensive renovation work. The grand reopening will be marked by the unveiling of the museum’s newest and grandest inhabitant: The fossilized skeleton of a nearly eight-meter-long dinosaur from Switzerland, which will be placed at the entrance.

As the new poster child of the museum, the dinosaur fossil will follow in the footsteps of Meggie, a ground sloth and visitor favorite who had to be retired from the museum two years ago due to age. Since then, Meggie’s exhibition space has been occupied by a unicorn constructed from a narwhal tooth. “We thought a dinosaur seemed to be the best solution, especially since dinosaurs are a prime example of how life has changed on our planet,” says Lukas Keller, director of the museum.

Found and excavated in Frick
In a painstakingly precise process spanning the last two years, the plateosaurus fossil was carefully excavated from the Gruhalde clay pit in the town of Frick and prepared for exhibition by paleontologist Ben Pabst and his team. Propelled by its powerful hind legs, the plateosaurus (Plateosaurus engelhardti) roamed a flat, swampy landscape over 200 million years ago. The mostly vegetarian creature had a small skull with sharp serrated teeth, a long flexible neck, and large claws that it used to dig up roots and tear down tall plants. Scientists believe it weighed between 1.8 and 2.0 tons and was around 15 to 20 years old when it died. “This plateosaurus is one of the most beautiful and complete specimens that has been found in the clay pit so far,” explains UZH paleontologist and museum curator Christian Klug.

Shoulder bones with a story
The right shoulder of the new fossil has garnered special attention from scientists: Compared to the left, it is much thicker due to changes in the bone. “These massive bone growths made the arm pretty much useless for the dinosaur,” says Klug. The growths make the bone of particular interest to scientists, as there are very few fossils that exhibit extensive healed injuries of this kind. Klug and Pabst agree that a quadrupedal animal would not have survived such an injury, leading them to conclude that the plateosaurus likely walked on its hind legs. “The frog-like position of the dinosaur’s hind legs also indicates that it probably got stuck in the mud and died there, like so many other creatures in the Frick region,” says Dennis Hansen, who designed the concept for the plateosaurus installation.

True-to-size reproduction in a prehistoric setting
Visitors to the museum will be able to admire both the fossil of the plateosaurus as well as a four-meter-tall reconstruction of the animal. The museum team worked with an award-winning Danish company specializing in museum models and paleo-reconstructions to create the plateosaurus model. It is based on the fossil found in Frick down to the last detail, including the dinosaur’s abnormally thick right shoulder. The life-like reconstruction is surrounded by a landscape of giant horsetail plants and ferns, giving visitors an insight into the type of vegetation that existed in the time of the plateosaurus: flowering plants and grass did not yet exist. “The plateosaurus truly covered a lot of territory when searching for food,” says Hansen. “Who knows, maybe our dino even once set foot on the current grounds of the museum during one of its excursions.”

Twitter
Tweet
Altro in questa categoria: « New nanomedicine can diagnose and treat prostate cancer in a more efficient and less aggressive way than chemotherapy Ten minutes of massage or rest will help your body fight stress »

La Malia site, a window onto the Up...